This document introduces features of Vivid Trace, an add-on for Atlassian Jira. This document covers the following topics:

Vivid Trace automatically gathers up related issues by tracing along related issues using Jira's Issue Linking feature and parent/sub-task relationships using Jira's Sub-task feature, and presents the resulting trace information as an issue relation graph. All of the issues in the graph are either directly related, or are indirectly reachable by following further along the web of related issues, no matter how distant. An issue that has even many relations will appear exactly once in the graph. Issue relation graphs yield total visibility of all issue relations, even cross-project, enabling you to understand which issues are involved, how they are related, and a variety of other, customizable information.

This graph format faithfully provides the most direct and accurate view of the underlying issue and relationship information. See Issue Relation Graphs for full details.

Lines connecting issues indicate a direct relationship between the issues with issue links or as parent/sub-tasks.
Relationships are labeled with the nature of the relation. Additional, overlapping relations between the same two issues are denoted with +n.

Resolved issues are shaded and their issue keys are struck through.

The current issue (if any) has a halo.
Quickly navigate to another issue by clicking or tapping it.

Accessible from nearly everywhere in Jira, the Trace Studio is a focal point in Vivid Trace. With it, you can visualize related issues, produce traceability reports, conduct change impact analysis, ascertain compliance, and much more. You can design, run, save, tweak, and share traces with parameters that parallel the relations() JQL function suite. You can also design the information display to help you visualize, analyze, and communicate trace results. See Trace Studio for full details, including a quickstart.

Trace arbitrary JQL queries or any number of issues of interest, according to various criteria. Design the presentation of results.

Export the results in a variety of formats or further process the issues.

Visualization of trace results including issues and their relations.

Vivid Trace provides contextual traces on individual issue detail pages and at the project level. This section details each of these contexts.

The issue context trace displays an issue relation graph for the current issue, according to its associated project configuration. You can access the issue relation graph for a specific Jira issue wherever issue pages are regularly displayed in Jira, including in the issue browser and in the Issue Navigator. You can configure the project to display traces as issue panels or issue activity tabs, and to restrict visibility of traces to certain people.

Note that the graph might not automatically refresh when performing certain issue operations, such as manipulating issue watchers or voters.

The issue relation graph is in the Trace section, accessible when viewing an issue.
Click this section header to alternately hide or reveal the graph. While hidden, graphs won't be shown, improving page load performance.

Bring the graph as-is into the Trace Studio to conduct further inquiry, export the graph, or save the trace for future recall.

Instantly refresh the graph in real-time, avoiding the need to reload the entire issue page.

Change your personal graphing options, perform actions with all issues in the graph, or configure graphs for the project. See Context Trace Menu below.

A context trace menu accompanies contextual issue relation graphs. This menu contains options for changing your personal graphing options, actions that operate on the graph as a whole, and an entry point to the project configuration.

Click or tap the drop-down button to reveal the context trace menu.

You can also see traces for an entire project. The graph depicts all issues associated with the project, including their out-of-project relations, according to the project configuration.

View the issue relation graph for the project by selecting Trace from the project navigation sidebar. 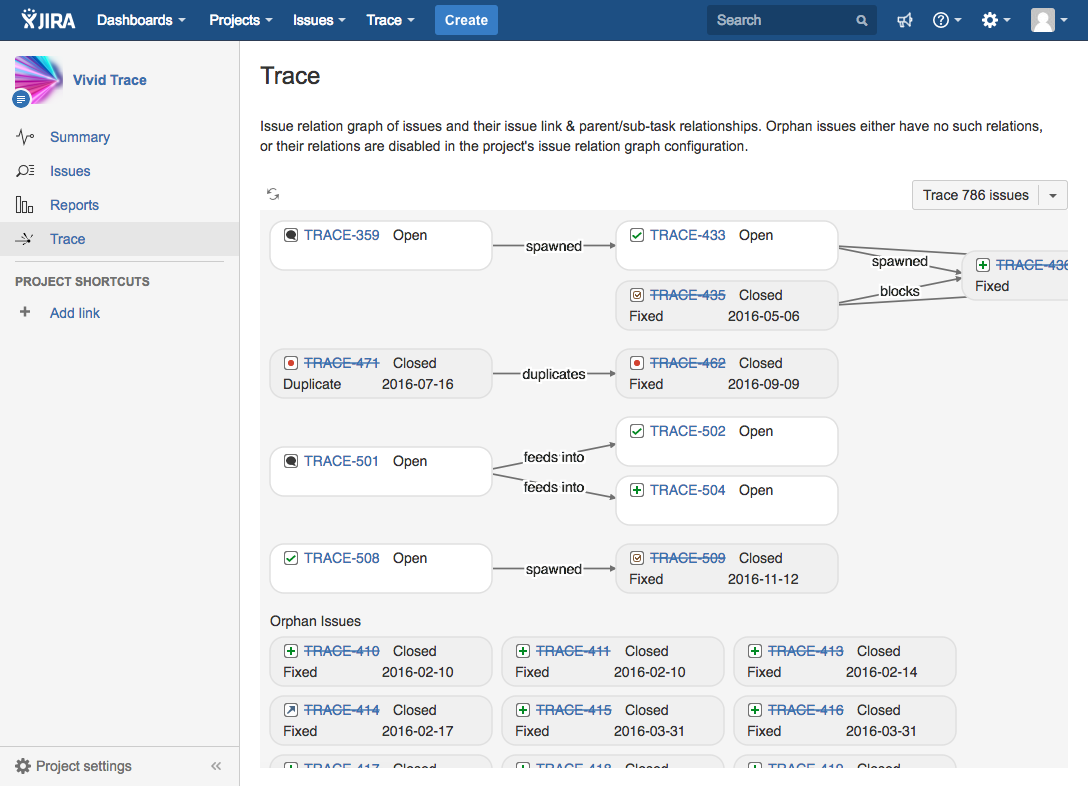 The Project Context Trace section. It depicts a trace of all issues in the current project.

The contextual project and issue details views can be customized in each of your projects. Administer Projects permission is required on the project to adjust its configuration. A project's configuration determines how contextual traces are displayed within the Jira project, even of related issues coming from other projects whose own home project configurations may differ.

The following explains each setting in detail.

Relation graphs on issue detail pages within the project can be displayed either as a panel or as an activity tab. Use this Display Format of Traces in Issue Detail Views setting to select how the graphs will be displayed in your project.

This setting is situated in the trace settings, accessible using the procedure at the start of this section. Changes made to the project configuration will be immediately visible to all viewers, and do not affect the trace settings of other projects. 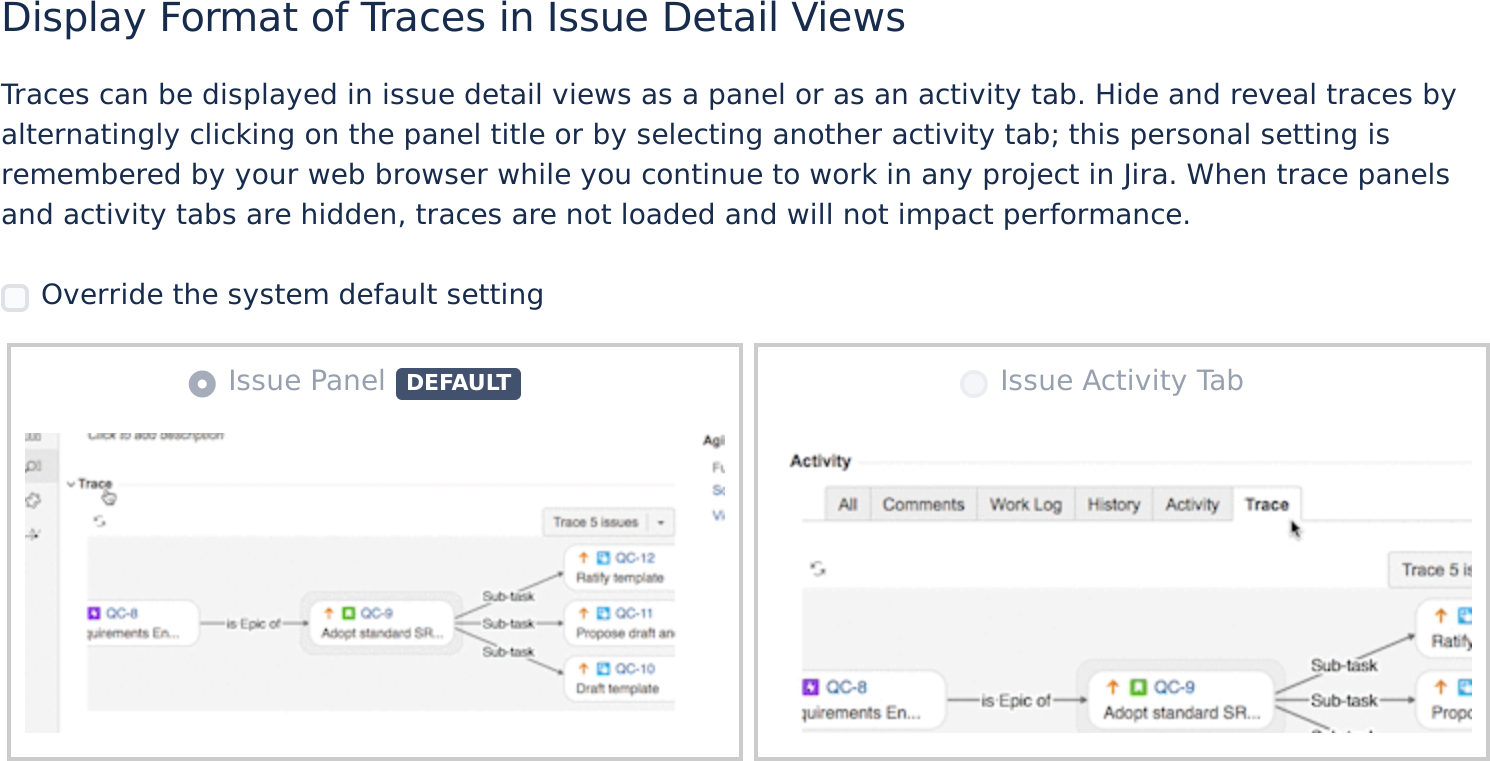 Override the system default value to set your own preference.

When the system default setting is not overridden, it is automatically applied to your project.

By default, traces within the context of the project are visible to anyone who views issue detail pages in the project. To limit display of traces to specific Jira security principals and hide traces from everyone else, adjust the membership list by adding specific project roles, groups, and individual users. Traces will not be shown at all when the list is empty, in effect disabling issue detail view contextual traces within the project. Note that this setting is not a form of security access control; people to whom traces are hidden will still be able to trace issues belonging to the project, subject to security settings.

This setting is situated in the trace settings, accessible using the procedure at the start of this section. Changes made to the project configuration will be immediately visible to all viewers, and do not affect the trace settings of other projects.

Override the system default setting to make traces visible in issue detail pages to select viewers within this project. 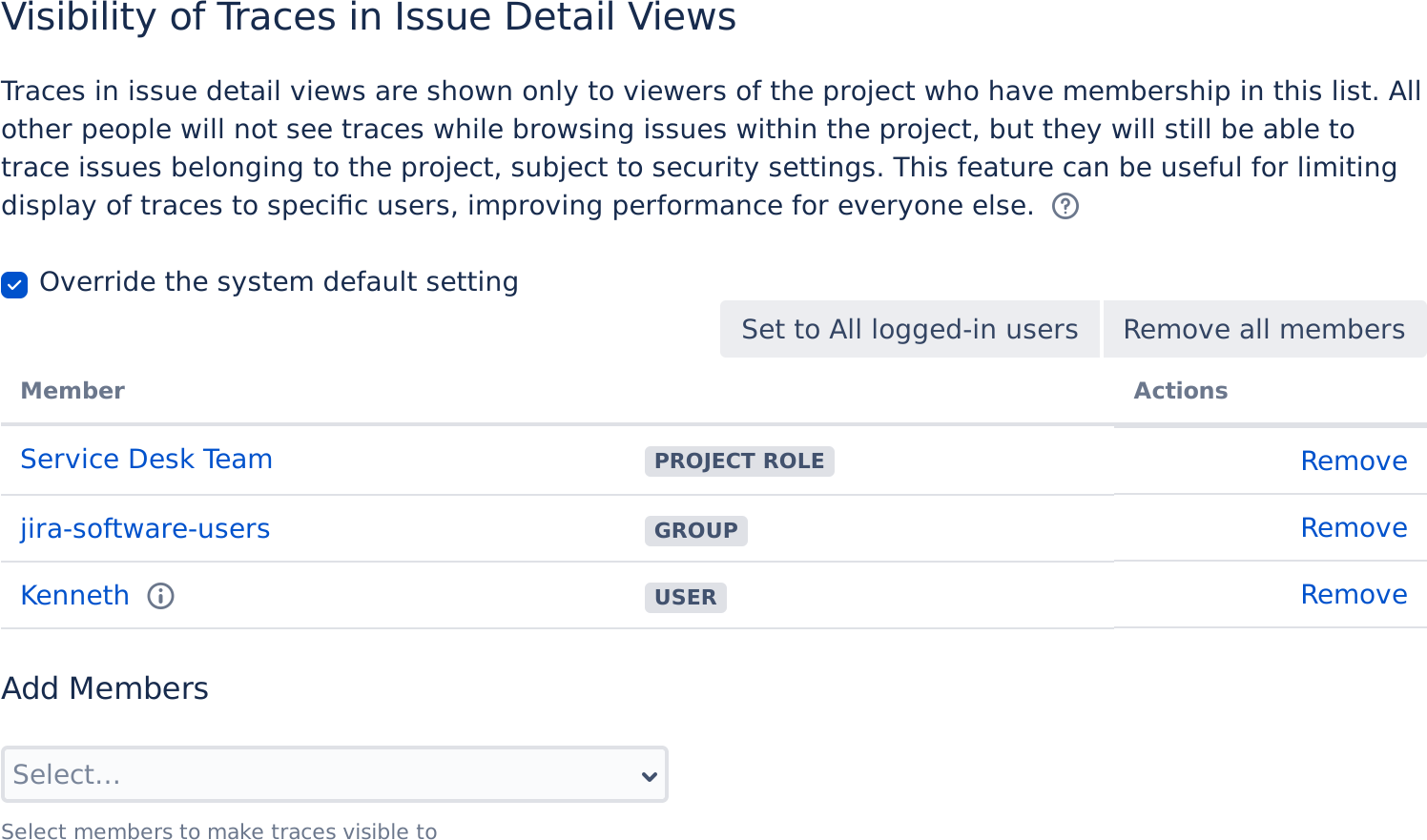 Traces in issue detail views are visible to members of this list. Remove individual entries using the action button.

You can keep your traces focused on just certain issue types by following or ignoring specific issue types. This setting can help to reduce the size of the trace results and produce a more favorable signal-to-noise. See the Artifact Types section in the Trace Studio document for information on usage. 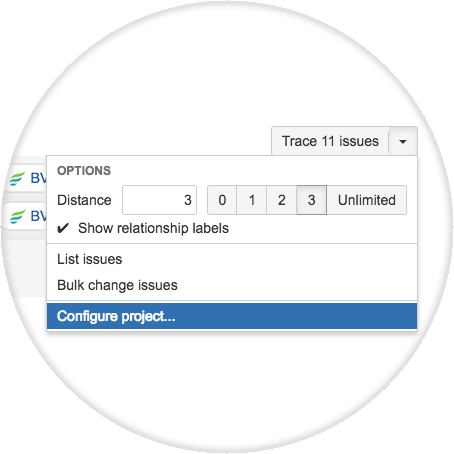 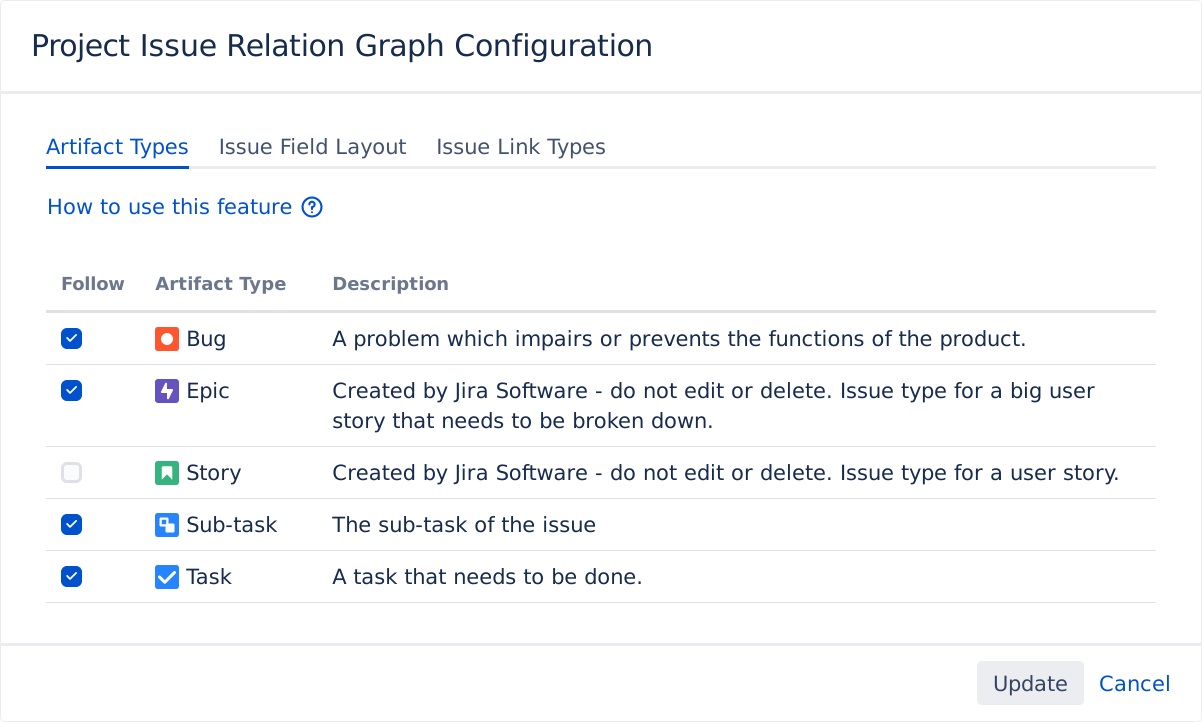 You can customize what issue information is displayed in the issue relation graphs by designing the issue field layout. When viewing graphs in the context of a certain project, the graph will use the layout for that project, even for issues coming from other projects whose home project configuration may be different. Issue Fields and Layouts explains usage and details the fields supported by Vivid Trace. 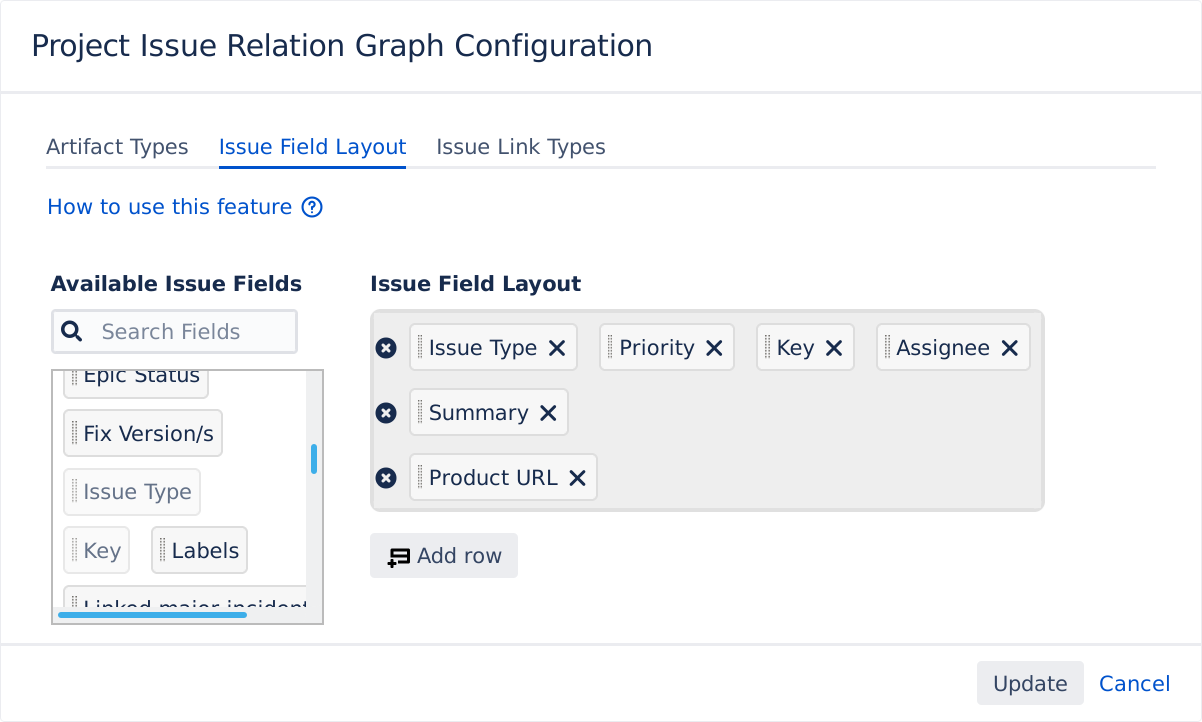 Issue relation graphs are calculated in part by following issue link relationships between issues. You can customize traces to follow or ignore specific issue link types as desired. When viewing graphs in the context of a certain project, traces will follow relations according to the settings for that project, even for issues coming from other projects whose project configuration may be different. See the Issue Link Types section in the Trace Studio document for information on usage. 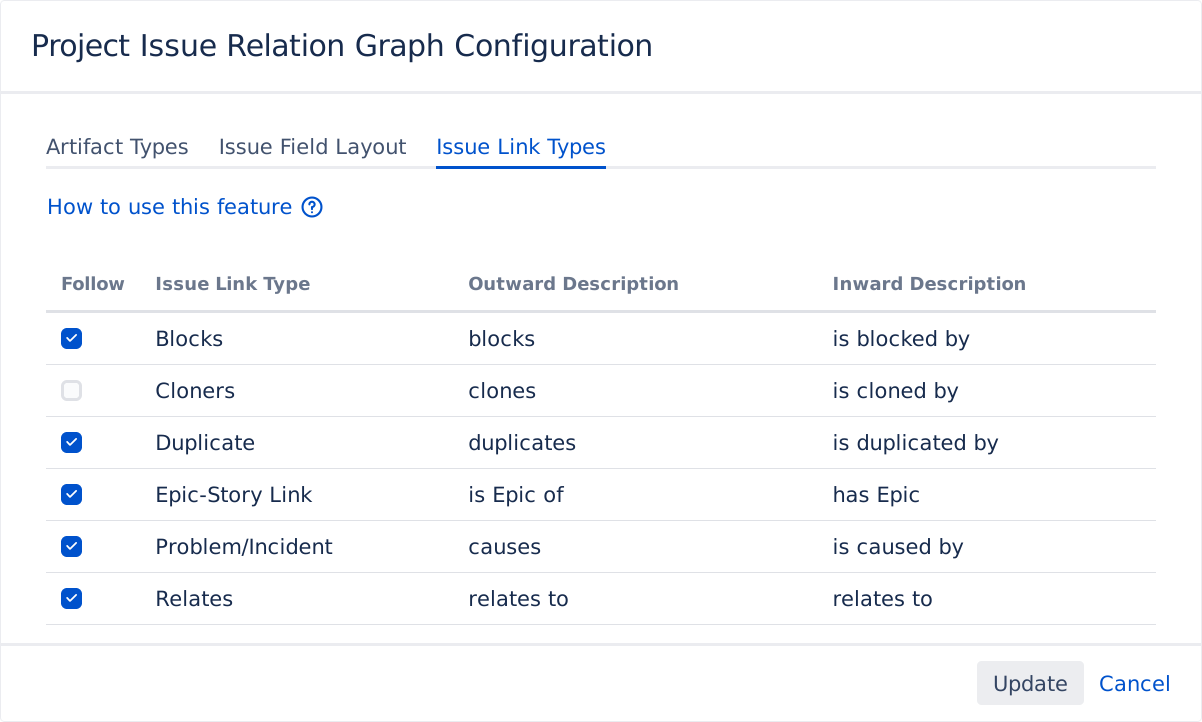 The Trace menu is located in the global navigation menu bar at the top of nearly every page within Jira. 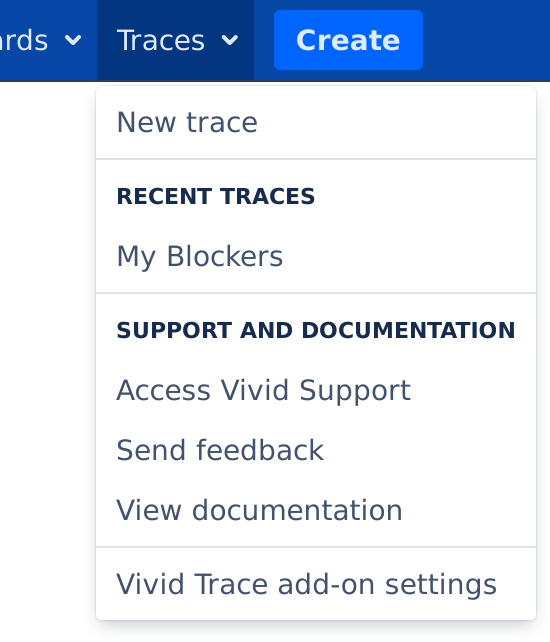 Vivid Trace provides a suite of JQL functions for comprehensively tracing issues along their issue link relationships and their parent/sub-task relationships at the aggregate level. Highly customizable, these functions address a wide range of needs, from producing the same list of issues as when viewing an issue relation graph for that same issue, to pinpointing all issues outside of a project that are blocking a release, and much more. The JQL function relations() and its siblings relatesWith(), links(), parents(), and subtasks() are all thoroughly documented in the JQL Reference, along with plenty of example JQL queries modelling real-world situations that you can refer to when writing your own queries. 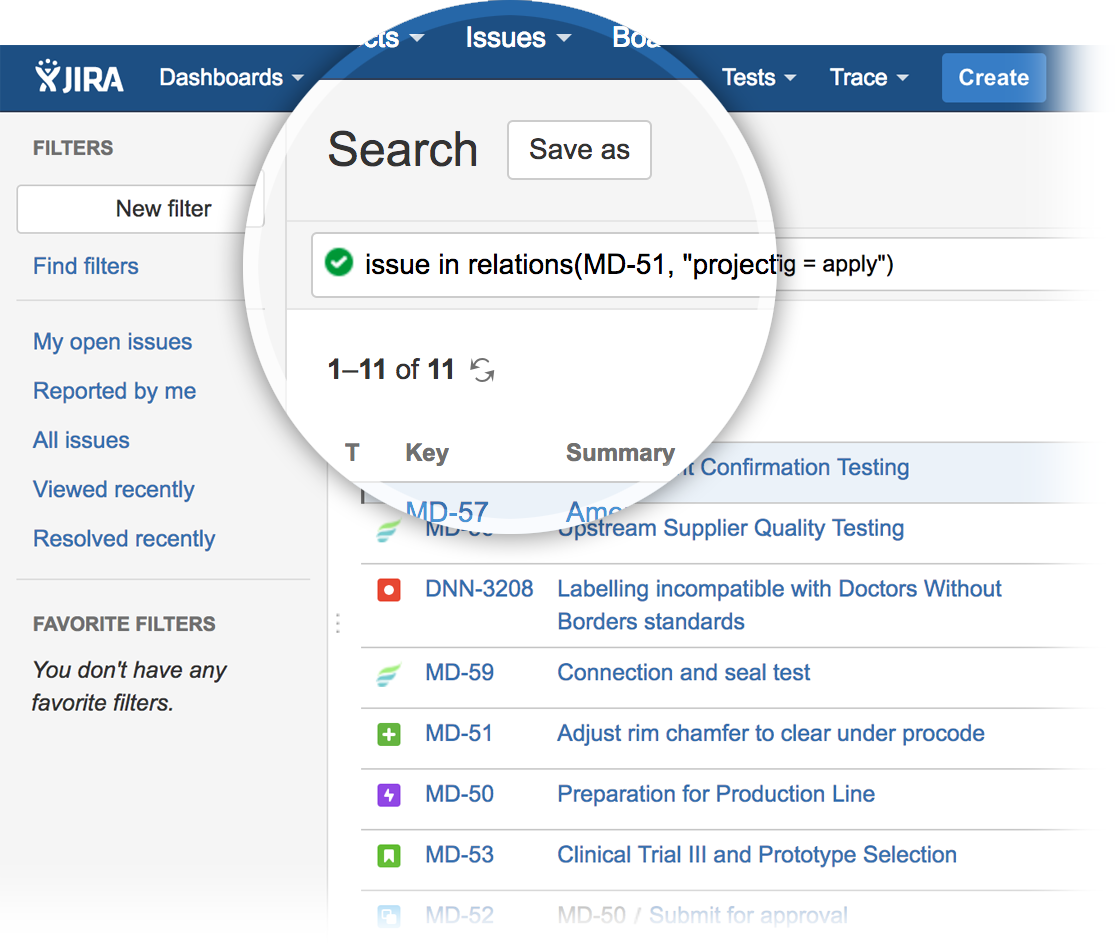 All issues in the issue relation graph can be found with a search using the relations() JQL function. These functions essentially produce the same set of issues as corresponding issue relation graphs but in the form of advanced JQL search results in Jira's Issue Navigator. 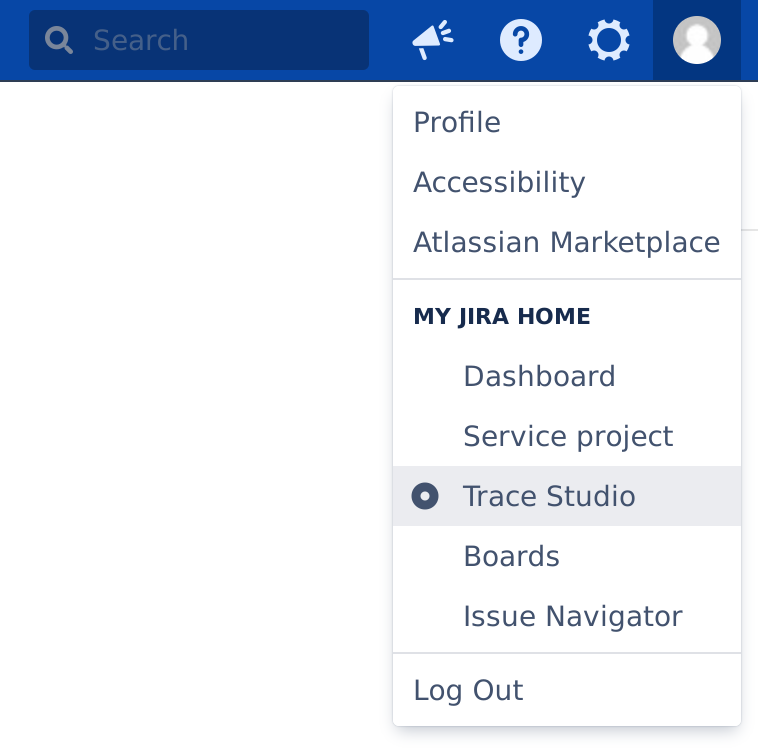 Your language setting is accessible in your Jira account profile.

You can set your Jira Home to the Trace Studio.