Accessible from nearly everywhere in Jira, the Trace Studio is a fundamental feature of Vivid Trace. Its premise is to place the full power of Vivid Trace into your hands to trace issues and their relations over the entirety of your Jira system while benefiting from its data-centric operation, rapid feedback cycle, and outcome-driven design. With it, you can visualize related issues, produce traceability reports, trace the current status of outcomes of customer support requests, conduct change impact analysis, ascertain compliance, and much more. You can design, run, save, and tweak traces with parameters that parallel the relations() JQL function suite. You can also design the information display to help you visualize, analyze, and communicate trace results. This document explains how to use the Trace Studio in terms of these outcomes.

At Vivid's Concierge Service you can schedule a walk-through of the Trace Studio and any other aspect of Vivid Trace (free of charge).

This section helps orient you to the Trace Studio's user interface, guiding you towards self-proficiency. Approximate time required: 10 minutes.

You can adjust your seed issues query, pressing Enter after each adjustment to re-run the trace. Note that if the seed issues don't have issue links or parent/sub-task relations, or there are no issues in Jira for you to access, the trace results won't be impressive and the value of the Trace Studio won't be apparent.

Now let's experiment with the Trace Studio's iterative, rapid-feedback approach to developing traces and inspecting data while reducing your cycle time. This process will be more meaningful if you have a specific goal in mind.

Experiment with trace configuration settings. In Relations Parameters, try setting the distance to 0 (zero) and then slowly incrementing it one-by-one to better grasp how distance works. You can graph the exact results of JQL queries by setting the distance to 0. Adjust some Display Options to influence how the results are graphed and arranged. Add fields to the Issue Field Layout to produce more information about the issues in the results, such as the Summary field. Try disabling irrelevant Artifact Types and Issue Link Types to improve signal-to-noise in the graph.

To export the trace results, use the Export button in the Toolbar to export the graph in the file format of your choice. A file will be downloaded. Locate the downloaded file, and open it to inspect the results. The selection of file formats enjoys wide-spread compatibility with other software and services meaning that exported files can be used as you see fit, such as to be embedded in other documents like Microsoft Excel spreadsheets and Word documents, or sent to other people.

At this point, hopefully you have a sense for what you can accomplish with the Trace Studio. As you gain proficiency, it all comes down to asking the right questions through the seed issues and the other tracing criteria, and in designing the information display of the results.

This section provides an overview of the Trace Studio user interface and then proceeds to detail each of its constituent parts. The user interface is composed of several panels and toolbars that surround a results panel. The results displays the issues and relations of your current trace results as an issue relation graph. This overview is interactive: click, tap, or hover the mouse to focus on specific parts of the user interface. 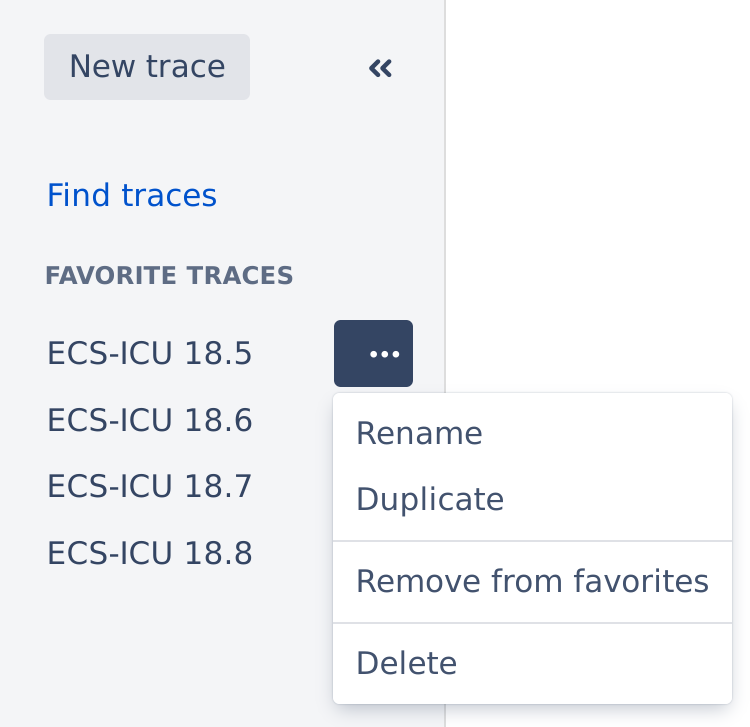 Click to alternatingly hide and reveal the Favorite Traces side panel to increase viewing space and reduce distraction.

Click to reveal a menu of operations for a trace configuration.

Select a trace configuration to load it.

Once created, trace configurations can be saved for later recall, allowing you to regenerate the trace with its particular settings but executing on current Jira data. Loading a trace configuration, by clicking or tapping it, sets it as the active trace in the Trace Studio. The current trace session is discarded and the loaded trace immediately executed.

Use Find traces to find and add trace configurations to your list of favorites.

Saved trace configurations are susceptible to changes in the various Jira objects used in their trace configuration. If those objects change in name, or are deleted, then recalling affected traces might result in missing information, misleading results, or errors. Examples of such objects includes referring to custom fields and projects by name in the seed issues criteria. For this reason, we recommend that you confirm the validity of the trace configuration and examine any warning and error messages whenever the trace results are important. Alternatively, you can consider the use of object IDs as reckoned by Jira, which trade readability for stability.

Click or tap the star to toggle the favorite status of a trace configuration.

Name of the current trace configuration.

Click or tap to reveal more operations for the current trace.

Indicates that changes have been made to the current trace configuration since it was last saved.

This component indicates the currently active trace and provides means to save and update named trace configurations for future recall.

Inspect a trace configuration's metadata or change its name. 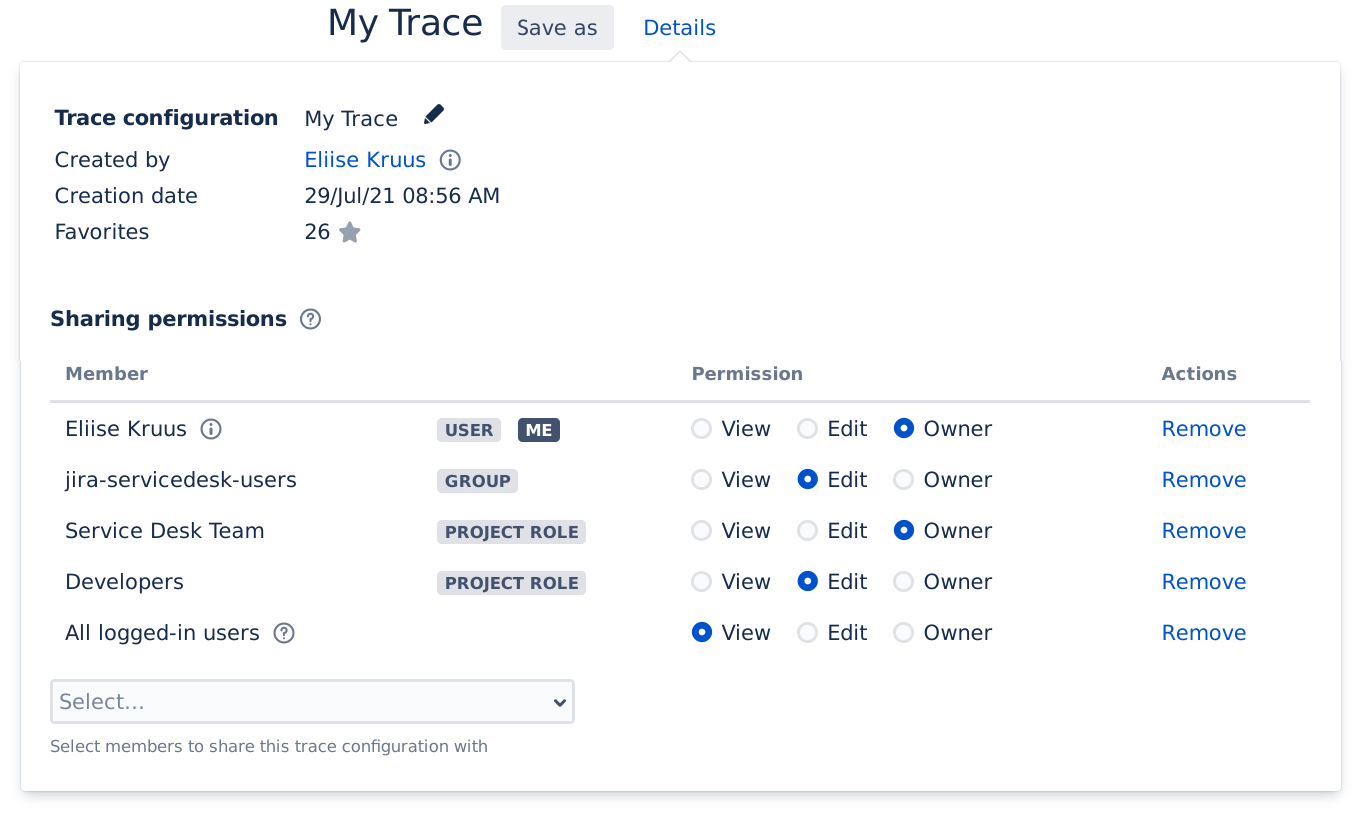 Use the details inspector of the current trace configuration to confirm trace metadata and modify its sharing permissions.

Add and remove members and set their permissions on the trace configuration.

While a trace configuration can be shared, other people's trace results might differ from yours depending on their access permissions to the artifacts encountered during the tracing process. As a rule, the sharing permissions must always list an owner. If you inadvertently strip yourself of ownership, please ask your administrator to assist with restoring permission.

Refresh the graph in real-time, and export the trace in a variety of file formats.

The Export feature requires a web browser that meets certain levels of compliance with web standards. Support for these standards among prevalent web browsers is not uniform, meaning that the quality of exported files might suffer. Vivid Trace makes limited attempts to detect browser support, and in cases where the web browser in use doesn't support specific export formats the associated Export menu items will appear disabled. Concretely, Google Chrome offers the best support, followed by Firefox. Exports are completely unsupported on Apple Safari and Microsoft Internet Explorer.

The export derives its data directly from the trace issue relation graph; the trace is not re-executed.

Perform operations on the graph as a whole.

List issues and Bulk change issues find issues not by re-using the issues in the trace results but by executing the same trace configuration on current Jira data. The search results might differ from the issues appearing in the graph if the underlying issue and relation information has changed since the graph was generated.

Press the Enter key to run the trace after inputing or editing the seed issue criteria.

Input a whole number to limit the tracing distance, or select one of the presets.

The Relations Parameters component of the trace configuration specifies which issues to start tracing from and how the tracing process should proceed.

Even if the distance is set to zero (0, meaning "graph only the seed issues"), the graph will show the relations between the traced issues according to the other settings in the trace configuration. This is useful for graphing the exact issues resulting from a JQL query.

The trace is re-run anytime a setting is changed.

The Display Options component of the trace configuration controls arrangement and appearance of issues and relations in the trace results.

The graph is redrawn whenever a setting is changed.

All issue link types in your Jira system are listed here.

Click a checkbox, or anywhere in its row, to toggle the issue link type. Only enabled types are followed and drawn during tracing.

The Issue Link Types component of the trace configuration controls which issue link types are followed and ignored during tracing.

The issue link types setting corresponds to the issueLinkType parameter of the relations() suite of JQL functions. The trace is re-executed each time a setting is changed.

All artifact types available in your system are listed here. 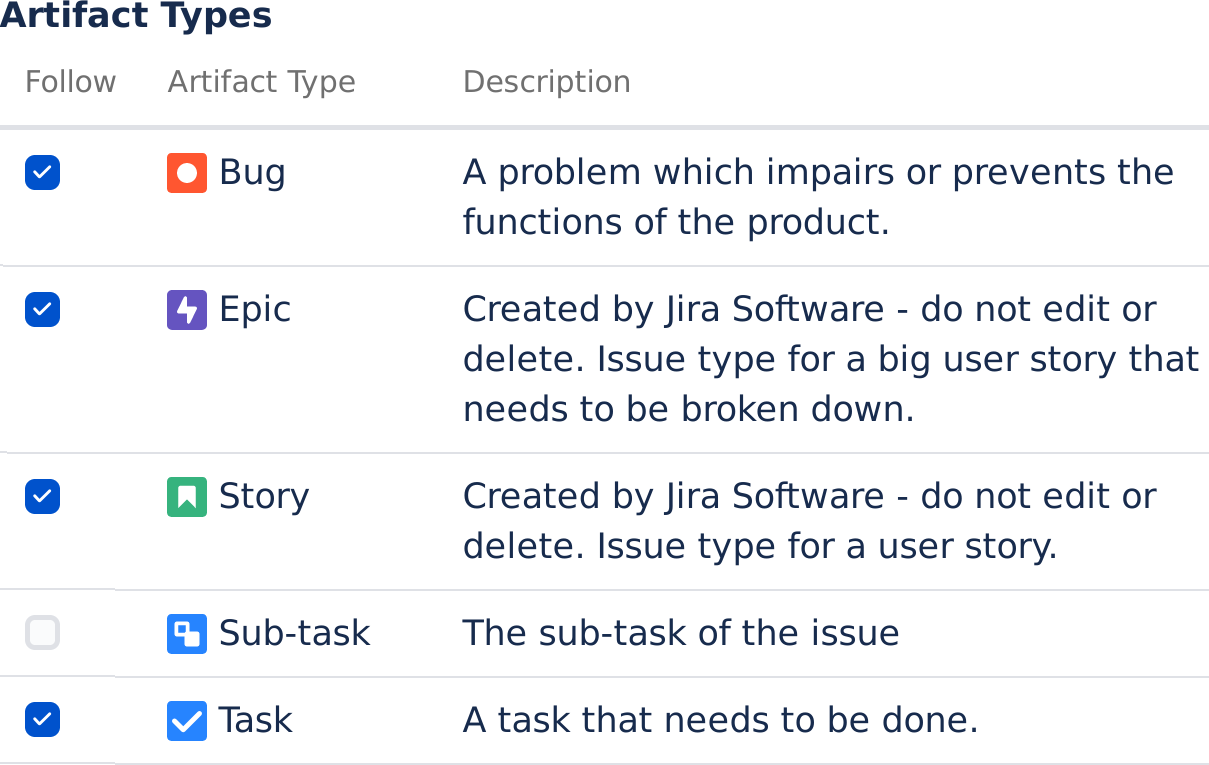 Click a checkbox, or anywhere in its row, to toggle the artifact type. Only enabled types are followed and drawn during tracing.

The Artifact Types component of the trace configuration controls which artifact types are followed and ignored during tracing.

The issue link types setting corresponds to the artifactType parameter of the relations() suite of JQL functions. The trace is re-executed each time a setting is changed.

Use the Issue Field Layout component of the trace configuration to design the issue field information that appears in issue lozenges in the trace results.

Issue Fields and Layouts explains usage and details the fields supported by Vivid Trace. Note that all issue fields available to you across all projects in Jira are available in the issue palette. The trace is re-run whenever the layout is changed.